TO ALLOW FOR THE COMPLEXITY OF THE WORLD

DENNIS DETER & LEA MARTINI – A HISTORY OF THE WORLD

The Berlin-based choreographers Dennis Deter, Lea Martini, and their team joined two elementary school classes from Potsdam to discuss a fundamental question: what is the origin of the universe? Eine Geschichte der Welt (A history of the World) was developed as part of the project explore dance – Tanzpakt Stadt-Land-Bundand does away with conventional educational expectations.

In 1977, the Americans sent the spaceship “Voyager” into outer space, loaded with cargo that was supposed to represent humanity. “You were not asked to contribute to this representation, and I wasn’t asked either. What sort of world did they try to represent when neither you nor I were asked?” writes British filmmaker Peter Greenaway about an exhibition, which he curated in 1992. In “100 Objects to represent the world,” he tried to install a similar representation of the entire earthly world on just a few square meters—creating a caricature of the human endeavor to depict everything in a complete and encyclopedic way.

Dennis Deter and Lea Martini’s project Eine Geschichte der Welt(A History of the World), which they developed as part of explore dance atfabrik Potsdam, appears to make a similarly grand gesture. Together with students from two elementary school classes they explored the question what the universe was originally made of and how it came into being.

I brought a handful of objects to the fifth of the six encounters between the artists and the 2nd grade students of the Gerhart-Hauptmann-Grundschule. Each of them stands for one question I asked in the interview. The Matryoshka doll resembles the “larger question“ – meaning that of the origin of the universe. This, I suggest to the students, is probably a pretty difficult question to answer, even for adults. But I am proven wrong. The kids are pretty sure they know the answer: “The earth came into being through the Big Bang,” a girl tells me excitedly. Other kids begin to add details: “First, there was only water. Then fish slowly developed.” And a boy adds: “Next came the amphibians. Then the reptiles and dinosaurs – which are in fact reptiles. Then came the mammals. And that’s the whole story!” 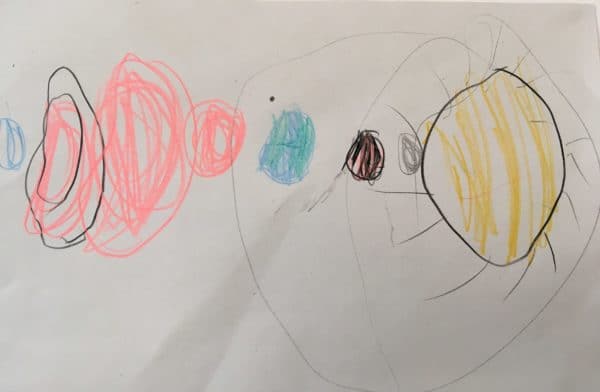 And yet Eine Geschichte der Welt (a History of the World) does not quite work in this way, it is no as clear-cut and linear as the theory of the origin of life itself. The abstract scenic images that Martini and Deter have designed in tandem with dancer Johanna Ackva and stage and costume designer Filomena Krause allow for a lot of space for one’s own imagination. And the little experts’ imagination certainly knows no boundaries. After a brief physical warmup for all participants, Lea Martini appears, hidden in a huge grey fur ball, in the part of the studio that today functions as a stage. She boldly pushes away a few balls that are sorted by size, and sits down taking the first seat. When a new musical theme begins, she picks up the ball she is wearing so that her feet become visible. Walking in a decidedly slow way and with mock elegance, the ball-on-feet marches through a field full of yellow table-tennis balls and throws, with widely extended legs, a few fur balls here and there.

In the feedback interviews that followed the performance, Lea Martini asked the children what they saw. There were probably about as many answers as children present, 26 to be precise. In short: the huge fur ball was either associated with a “giant guinea pig,” “a rock,” “the earth,” “the moon,” or “the sun.” The tiny fur balls reminded the students of excrements, of “eggs,” “small balls that new new worlds emerged of,” but were also seen as parts of a world being destroyed by pollution. The children generally ascribed both creative and destructive powers to the giant ball. The table-tennis balls that marked the environment of the larger objects were on the other hand described as “small air bubbles” or “stars.” 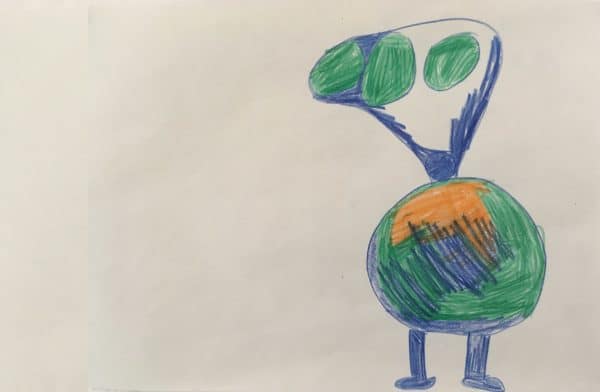 The work process that was instigated with the children and teenagers is the starting point of the production ofexplore dance. Yet the project is not designed to take the shape of dance-educational workshops. “We are very serious about the question how to engage the children in the process and which possibilities we have to inform them on a physical, visual, and intellectual level,” says Lea Martini during a talk in the kitchen at fabrik Potsdam. In order to realize their plans, the artists apply methods from dance formats and discursive formats that they also use when working with colleagues. “We don’t want to develop a piece that is cut out for this particular target group but instead apply a practice that we are already familiar with and that we can combine with our own artistic language,” adds Dennis Deter. The students involved in the project assume the role of an Outside Eye, sort of working as dramaturgical consultants – they assist the artists in figuring out what works, and what doesn’t.

DO ADULTS REALLY KNOW SO MUCH MORE?

During the first meeting with the group of kids – in addition to the 2nd graders, there is a regular meeting with 6th grade students – we try out a brainstorming exercise: everyone starts at zero, we all know exactly the same. The topic of Eine Geschichte der Welt (A History of the World) also starts on such equal terms. “In order to disrupt the unambiguousness of a grand narrative, we had to find something that concerns everyone and that at the same time is a rather speculative matter. We do not know what scientists will say about the origin oft he universe in 100 years from now,” explains Martini. Johanna Ackva adds: “I probably don’t know more about the topic today than I did in elementary school. We learn about and understand such big topics on a relatively low level of knowledge, unless we study them scientifically of course. Not even as adults we approach these questions with greater complexity and may even know less about them than we did das children.” 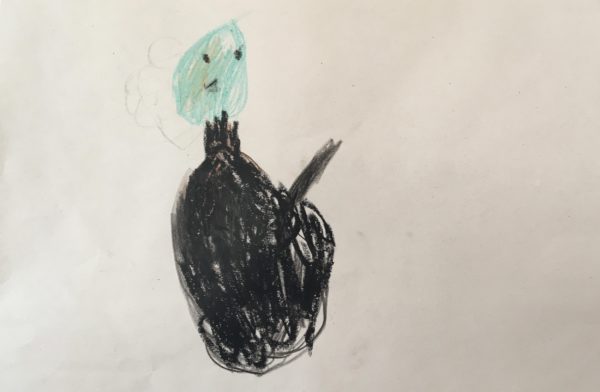 In contrast to many adults, children are very good at dealing with abstraction. “While grown-ups are often skeptical and try to understand, children immediately come up with ideas what it could be all about,” stage and costume designer Filomena Krause tells us. It is this clarity that also fascinates Deter about the 2nd graders: “they are extremely open and at the same time what they say is so concise.” What is striking about the encounter this morning is that the children’s associations remain widely open even when they know that, on a thematic level, they enter “outer space.” They do not limit themselves, for instance by suggesting that “once one or two kids have mentioned one particular thing, it should be that thing’s definition,” Martini observes. They also articulate thoughts that others’ have already talked about. Competition does not seem to matter here.

Projects like the one developed by Dennis Deter, Lea Martini, and their team show that knowledge creation is not a one-way street, but can also work as a mutual learning experience. And is this not the best opportunity to foster lateral thinking that goes against the grain? Their visits at fabrik Potsdamhave put the kids into exceptional situations. Maybe it is precisely this way of being surrounded by a different context, Ackva assumes, that leads to a girl’s answer to the question what differentiates the encounter with the artists from a regular school day: “I can focus much better here, and can remember things more easily.”  In addition, the kids also mentioned that they felt as if they had supported the artists. They thought that it was a good idea that the artists showed their ideas to someone before presenting them to a proper audience. And they also like that they, as children, got to decide for once.

The practice of the artists is defined by flat hierarchies and moves beyond fixed categories, and thus also beyond what is considered right and wrong. During an activity game where the children were allowed to transform into different creature, the existence of “flying elephants” was thus not per se excluded, Deter tells us. 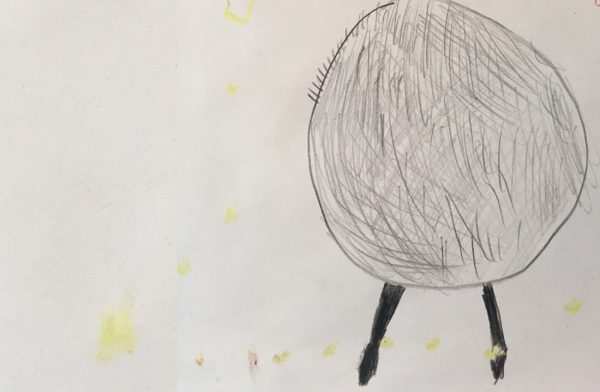 HOW TO NAVIGATE AN INCREASINGLY COMPLEX WORLD

In times of the Internet, our knowledge of the world has not only become more accessible than ever before, it has also become vaster. Especially because unambiguous meaning can no longer be ascribed, it is important for children to (self)critically navigate the constant flow of information. The author, theatre educator, and teacher Maike Plath writes in the context of the FRATZ Festival in her 2015 essay “Der konstruktive Moment von Bildung” (“the constructive moment in education”): “we constantly re-order the facts of the world, they are in constant motion and lead to ever new, increasingly complex interpretations. The more we are inspired to ask personal questions and explore them, the more we are eager to experience new things. As a consequence, our knowledge grows and becomes increasingly complex. The construct that is our biography emerges out of the sum of all these interpretations. In relation to how autonomously we are allowed to shape this growth process, we experience ourselves as self-determined in this world. It defines our competence to help shape and change it.”

TO GIVE UP ONE’S EXPECTATIONS

Strengthening the children’s “stubbornness” or “self-will,” as Plath calls it, is a very important precondition for their acceptance of different perspectives on the world. She refers to thoughts developed by the philosopher and communication specialist Vilém Flusser and his idea of “the freedom of the migrant.” She finds Flusser’s term of “terror” particularly useful: “only those who have left their homeland or were banished from it can recognize the banal, and therefore the replaceable character of the supposedly important things of the cultural homeland, and can thus reach a constructive and more open worldview. Bidding farewell to the claim that something is right just because it is familiar and has been culturally sanctioned is painful. That is why Flusser speaks of a condition of “terror.” This condition is certainly not a comfortable one. But is leads to a new, expanded perspective on things. 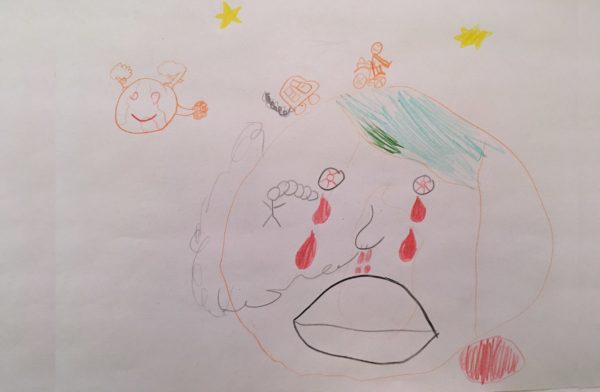 WHAT KIND OF WORLD DO WE REPRESENT?

This is why I was also terrified – in a good way – when I discovered that the “big question” was not easier to answer for adults as it was for children, but maybe even the other way around. To return to Greenaway: if we assume that another spaceship is sent off to space, which objects would we load it with and who gets to choose them? Maybe it would be a chip with a video showing Eine Geschichte der Welt(A History of the World). In one scene of the piece, the performers dance in inflated suits across the stage, they appear full of a flirty and exaggerated self-love. For the larger part of the piece, they however disappear in black suits covering their entire bodies. “Even if humanity disappears at some point, it will all keep on going,” Martini says.

Funded by TANZPAKT Stadt-Land-Bund from funds provided by the Federal Government Commissioner for Culture and the Media.