Delivering play instructions, or: How our bodies are changing due to the pandemic

Due to the exceptional situation, the production Transformations by Hamburg-based choreographer Moritz Frischkorn, which was planned for summer 2020 as part of explore dance, had to be cancelled. The photographer Pia Pritzel was to accompany the artistic production for a photo documentation, which would have provided an insight into the rehearsal process and the workshops with the students. Wondering how they might still be able to reach their young audience with dance and choreography, Pia and Moritz developed a concept in which they combined two projects: explore and dance (play instructions for children and young people) and Herzpost (“heart mail”).

This article is intended to document the development and implementation of the project cooperation and is aimed primarily at a professional audience. The pictures and videos are part of the project and address children and young people as well as adults who would like to participate in the project.

In their attempts to follow the corona-related contact restrictions, a number of cultural institutions developed play instructions aimed at a young audience, among them the explore dance network. For the duration of the restrictions, during which no productions could be performed live, the explore dance choreographers formulated instructions for the online journal in order to playfully encourage their young audience to move. What, for instance, does a collage have to do with dance, and how can children immerse themselves in fantastic worlds from home? The instructions are available here in the explore dance online journal.

With regard to these play instructions (and those of other theatres or institutions) Pritzel and Frischkorn addressed the following questions: Do the digital instructions reach the children? How do young audiences deal with digital formats? What happens with the instructions and how are they implemented at home? How can we translate the digital cultural content into analogue forms?

In order to ensure that the instructions actually reach their audience, they decided to focus specifically on their transmission, on the logistic choreography of their effective communication. Their aim was to not rely solely on the Internet as a medium of exchange, but to focus on analogue materials and the delivery of messages as well.

‘Herzpost’ (“heart mail”): Pritzel’s current project Herzpost (#❤️post), in which she organises pen pals for children and young people who are socially disadvantaged, lent itself to this experiment. With the help of calls to action via Instagram, she collects analogue mail, which she then forwards to children and young people. To do this, she’s building a network of social organisations and works together with Gertrude hilft, the Kinderschutzbund Hamburg  and Fördern&Wohnen , among others. Her aim is to offer children and young people a range of creative activities and thus help them out of a possible Corona-induced holiday boredom, at least during the summer – and, ideally, beyond. Some of the kids belong to risk groups and are thus faced with a lack of social exchange.

At the same time, the project offers a simple way to become active in the community, and tries to raise awareness of the fact that behind collective terms (such as ‘refugees’, ‘structurally/socially disadvantaged children’) there are always individuals. Herzpost offers the opportunity to use one’s own privilege to support structurally disadvantaged people in a playful way.

In the following, we document the two choreography tasks from the preliminary phase of the production Transformations.

For the first task Frischkorn works with the medium of collage. This artistic form of expression, which, among other things, has a tradition as a queer art form, encourages reflections about one’s own body image. Inspired by already existing materials, the young people choose which images they want to use; they decide on picture sections, arrange them spatially, and sort them by colour and form. On the one hand, this work asks them to relate to existing body images, and on the other hand, a collage is an invitation to put together a new image of one’s own body.

The choreographer has his own artistic language with which he reaches children and young people on a creatively sensual level. “How has your body changed in this exceptional situation?”, Moritz Frischkorn asks his young audience. The children are invited to express the physical experiences they had due to the Corona-related restrictions through artistic suggestions and play instructions. The selection of colours and shapes, as well as the overall composition of individual elements, often say much more about the experience of a situation or period of time than the spoken word ever could.

To make a collage out of movement and image is a multifaceted artistic technique. Be it in the context of  film editing, choreographic composition, or as a playful examination of media images of the body, the focus is always on the interplay of continuity and interruption. This mirrors the current social situation: routines are interrupted – for a while, all the usual activities for children were completely suspended. The question of how this affects one’s own body is not, in itself, a choreographic examination, but it does offer a basis for further reflection on this very issue. At the same time, collage allows for playful and fantastic appropriations: Who knows, maybe one would rather be a flying superhero or a caterpillar that pupates? 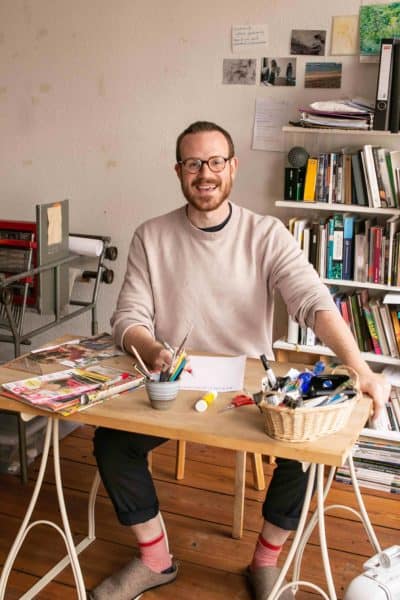 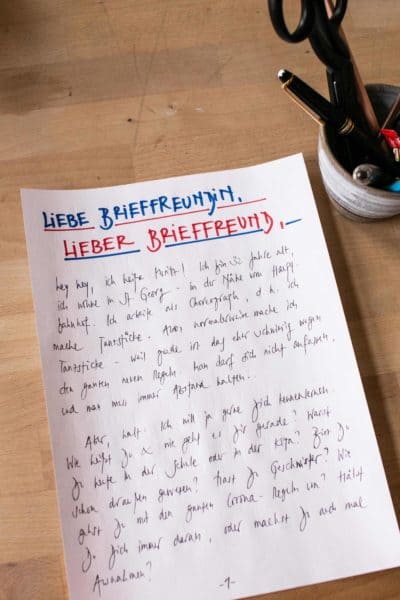 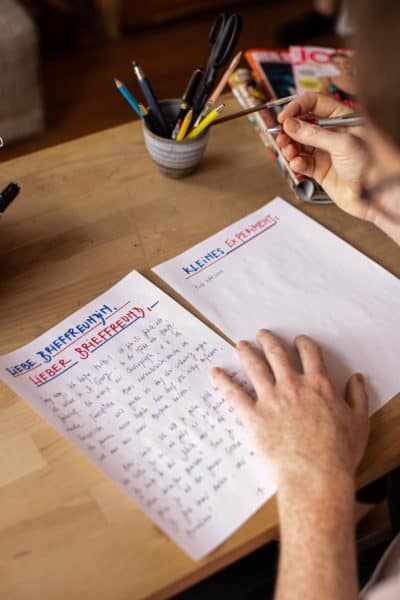 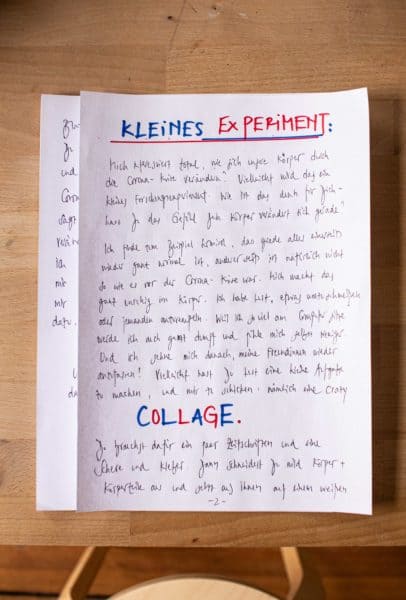 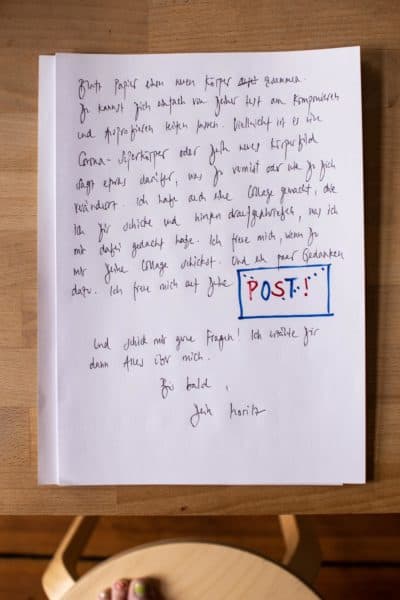 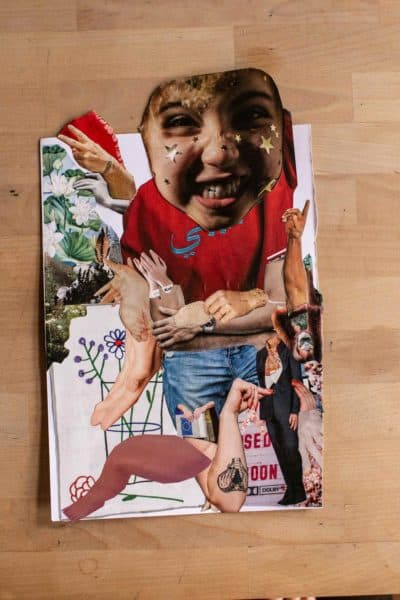 The task says that if you’ve collected at least three gestures, you make a little dance out of it. Play your favourite song and arrange the gestures one after the other. For inspiration you can watch this video: https://www.youtube.com/watch?v=ZiWtflMzflQ

The second task is concerned with the perception of gestures, and, in particular, the awareness of everyday gestures that have inscribed themselves into our bodies and that are hardly observable, since these body movements and postures happen intuitively and unconsciously. Why do I cross my legs so frequently? And which external impulses make me cross my arms? How can I express with my body that I am strong and courageous? Again, Frischkorn is concerned with focusing on those gestures that have become more prominent due to the special social situation in the wake of the pandemic. Which gestures do children and young people notice particularly at this very moment – is it the hands that need constant washing, is it the lack of touch, or is it other forms of greeting?

Gestures are familiar choreographic material. As physical movements that express and communicate a certain mood or affect of the body, gestures hover between communicative intention and its inherent ambiguity. They are an expression of how the body is always already speaking and behaving towards its environment, but at the same time they cannot always be unambiguously deciphered. Gestures are strongly dependent on their respective cultural and social context. As early as the nineteenth century, the dwindling of their collectively legible meanings was perceived as a disintegration of social structures. In a completely changed world, which has come to a standstill due to the pandemic, and is now suddenly picking up speed again, new gestures may emerge – gestures whose meanings and future we do not yet know.

Frischkorn challenges his young audience: Observe your parents and your siblings when they sit on the couch, talk to each other, are happy or angry. How do they move and what postures do their bodies adopt? What is it like on the streets, at school, what movements appear there again and again? Collect these gestures or poses: you can photograph them, paint them, or imprint them deep in your memory. It is important that you observe them carefully. How fast is the movement? What is the facial expression? Try to imitate these gestures as closely as possible.

The task says that if you’ve collected at least three gestures, you make a little dance out of it. Play your favourite song and arrange the gestures one after the other. For inspiration you can watch this video: https://www.youtube.com/watch?v=ZiWtflMzflQ

It’s still completely unclear in what ways Corona will change our world. To think about this together, in particular with children and young people, is an important social task. Choreographic work allows the participants to playfully experience the physical, gestural, and performative level of changes and new structures. At the same time, dance and choreography are particularly dependent on shared experience, on gathering and physical proximity. In the spring and summer of 2020, this wasn’t possible. Frischkorn and Pritzel’s letters thus represent the attempt to establish contact with the help of the old, analogous, and material medium of the letter. This requires a choreography of its own, a choreography of drawing, writing, packaging, carrying, reading, trying out. It is the attempt to carry on physical affection even over distance. The fact that this is not merely about posting something, but rather about the creation of commitment via mail, appears to be a programmatic and conscious decision. For who knows, perhaps the crisis will also bring old forms and ways of communication to light again. This would contrast the algorithmic control of movement with the diverse and discrete postal channels, and, in our attempts to return to normal, put special attention on the physical changes and needs that became obvious during the crisis.

Funded by TANZPAKT Stadt-Land-Bund from funds provided by the Federal Government Commissioner for Culture and the Media.